What a wonderful long weekend and fabulous 4th of July!  These are some photos that I got walking back to my car after the 5k I completed that day…there is a big parade every year and this town does a GREAT job with it!  People were setting up chairs and tents by 7am to get a good spot…serious parade go-ers for sure! 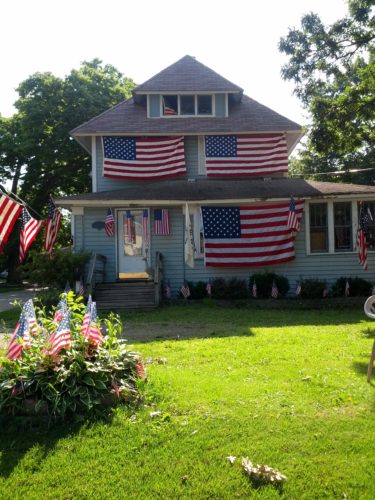 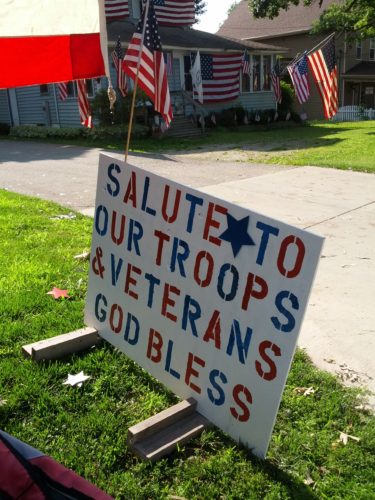 I ran this race last year (when temps were in the triple digits) and really enjoyed it.  This year, since the weather was better, the turnout was better too.  I think there were around 1,500 participants.  I picked up my race packet beforehand at the host bank since I knew I’d have to park far away and didn’t want to schlep my packet all the way back to the car.  (In hindsight, however, I wish they would have offered one night of extended hours or another location for packet pick up, because they were only open during regular banking hours..so for someone that works and can’t get there by 5, it can be a pain!) 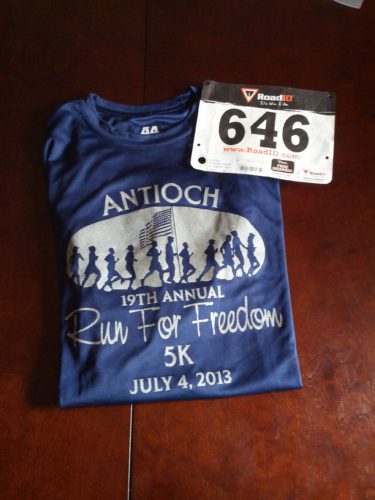 When I got my race packet, all that was in it was the shirt and a bib number.  The shirts are really nice and are moisture-wicking, but I ordered a medium and it was HUGE!  The sleeves are past my elbows and it’s super boxy.  For $25, I was hoping for a better fit/description of the fit so I could wear this around!  Also, there were no coupons or flyers or samples.  I assumed there would be some of those items in there like similar town races, but that wasn’t the case.  There were LOTS of race sponsors and local businesses involved, but it appears they only put their logos on the shirts and a handful of local businesses offered raffle prizes at the end of the race.  From a sponsor’s point of view, I’d push to get some sort of material into the race packets for all those participants!

The race itself started RIGHT on time, which I appreciated.  There were signs further back for walkers to gather, but it seemed like those were ignored by many.  So due to the walkers and just a high volume of people, I spent the first 1.25 to 1.5 miles just trying to weave in and around groups of people so I could hit my stride.  In fact, my slowest mile was the first one, and I got faster with each mile as the crowds thinned out.

At the 1 mile marker, the course went down a long stretch of two-lane road.  While there were plenty of police along the route, it felt that the majority of them were on this road every 30 feet or so, telling people to mind the cones and stay in one lane of the road.  It was really tough since there were SO many people, and it frustrated me a bit since I was trying to push myself.

There were a couple of very slight hills and the rest of the course winded through residential neighborhoods where residents set up chairs and cheered on the runners.  I loved that part- so encouraging!  Some people even put their sprinklers out and aimed them at the street which was AWESOME (last year, there were a TON more sprinklers, but then again it was 100+ degrees at that time!)

After crossing the finish line, there was plenty of water and Propel and fruit and bathrooms were nearby.  There was also plenty of space for runners to relax and to meet up with spectators, etc. although there wasn’t that much shade.  The results and raffle prizes weren’t awarded until at least 1 hour afterwards, so I decided to head out before then to avoid parade traffic and have extra time to prep for my family that came over that day. 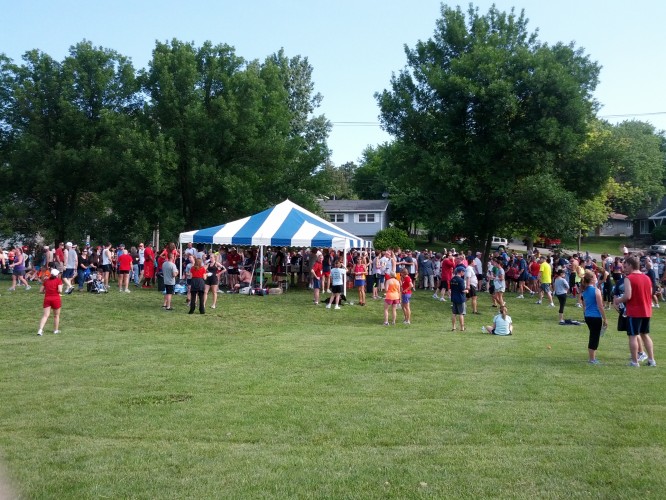 Overall, the race was very well attended and I was pleased with my time!  Although I ran slower last year and placed in my age group, I was happy to beat my time last year (and beat my time from the Firecracker 5k I ran a couple of weeks ago!)

Linking up with:
Still Being Molly/Lipgloss & Crayons
Chicago Running Bloggers