So when the hubs is away on a fishing trip, what do I do? Run back to back races of course!  Here’s a recap of my fun-filled weekend! 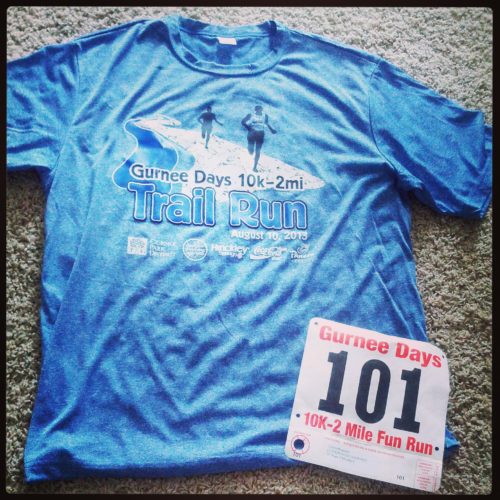 I really enjoy this affordable, local race from year to year and the course is almost entirely on the Des Plaines River Trail, which is so scenic!  I did this race with two coworkers (one did the 10k, one did the 2 mile run).  My coworkers picked up the race packet on Thursday and I got the gorgeous moisture wicking shirt above.  Every year the shirt is the same artwork, just a different color.  I really liked the color this year versus white and golden yellow in the past two years.  Unfortunately, I think they switched their shirt vendor and the sizing was WAY off.  I was bummed because I really wanted to wear this shirt- boo!  But I suppose there is more to the race than the shirt right?!

Anyways, the race started right on time and I got there early and was able to park nearby.  They had a record breaking attendance from what I heard with over 225 10k runners, which started first, followed by the 2 mile runners then walkers.  The audio system they used made it difficult to hear what was being said but for a smaller race, a large sophisticated audio system wouldn’t have been necessary.

The trail was marked off really well and included lots of volunteers along the way shouting out times, passing out water and offering encouragement.  I really appreciated the volunteers right by the signage when we would run under a bypass to make sure we wouldn’t collide with bikers that might have been using the trail at that time.

I was feeling great during the first couple miles and when I saw my pace, I couldn’t believe it!  I figured if I was feeling good, I would keep up the pace and just see what would happen.  Needless to say, I ended up with a PR and placed 3rd in my age group! Annnd..my coworker placed 2nd (about 5 minutes ahead of me)- how great is that?! 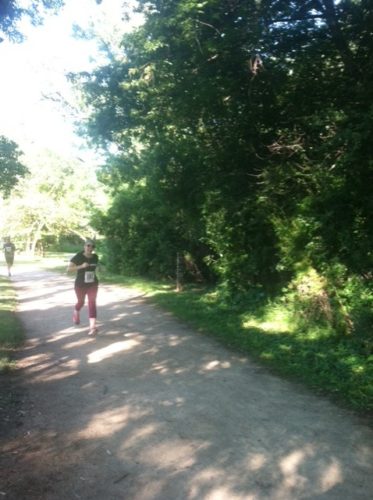 Thanks to my coworker for the sweet action shot!

There wasn’t any chip timing, so my Garmin had me at 6.13, but I it did lose the satellite connection when I went under the highway bypasses so that was likely the reason for the shortfall.  When we crossed the finish line we tore off the bottom portion of our race bib and they were kept in order along with our times.  A few minutes later, I was able to walk up to a tent and give my bib number to get a printout of my results. 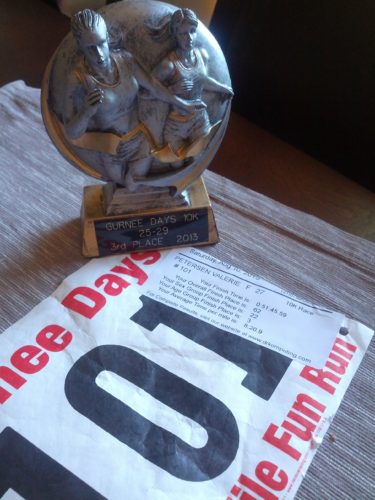 I joined my coworkers for some post-race food & refreshments.  There were mini baguettes, donut holes, fruit, Powerade & water.  Shortly after, awards were handed out.  Medals for the 2 mile and trophies for the 10k!  I had a great time at this race and the weather made it even more enjoyable! 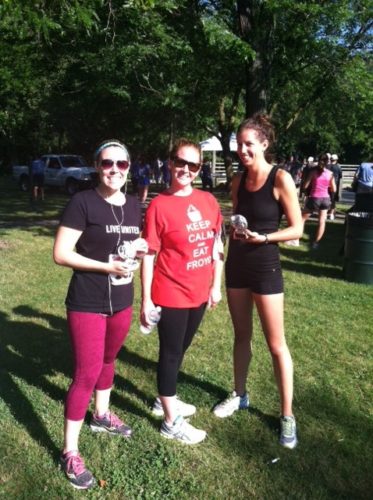 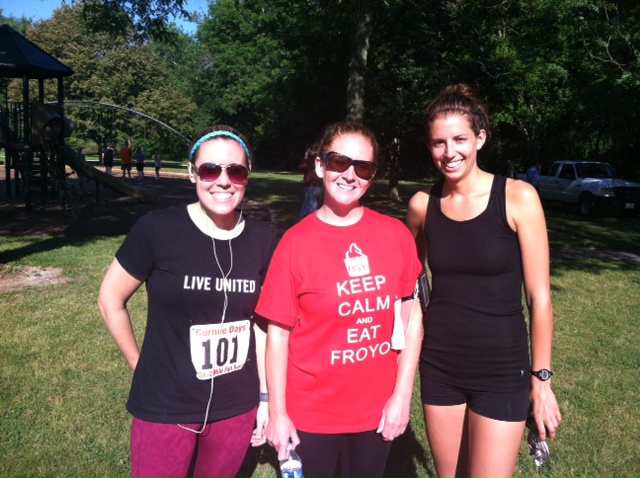 Later that day, I met up with Erin, Kelsey and eventually Kim for a sleepover at my house for the Iron Girl Tri! 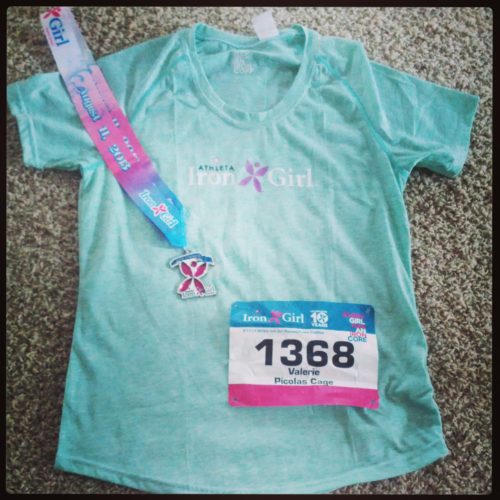 A while back, Erin reached out to the Chicago Running Bloggers group and asked if anyone wanted to create a tri team for the Iron Girl Triathalon.  I had always wanted to see what a tri was like (plus, it was pretty close to my house) so I jumped on board!  Erin was our biker (12 mi), Kelsey was our swimmer (1/2 mile) and I did the run portion (5k).  And with that, Team Picolas Cage was born.

We went on Saturday afternoon to rack Erin’s bike and get our race packets.  We came right before pickup ended at 5pm.  Then we headed to the bike area a few minutes later and a staff member made a comment that we had to leave since they were closed.  However…when you advertise that packet pick up ends at 5pm THEN you have to rack your bike, that area should close a little later, like 5:15 or 5:30.  Just sayin!

Anyways, we finished up there and headed to dinner.  We went through our race packets later and got a few samples (lotion, dehydrated seaweed, among other things) and a t-shirt.  I really loved the t-shirt but was expecting to get a little more swag from what I’ve heard about Iron Girl events in the past and especially despite the price ($95ish a person).

Needless to say, we still had fun despite these couple of “setbacks.”  We had some girl talk and made s’mores then went to bet.  We got up EARLY on Sunday morning and was on the road by 5:30am!  Parking was crazy.  The website and emails said that parking at the Pleasant Prairie outlet mall was for overflow parking, and there was no way that parking near the RecPlex was already full but we were directed to that outlet mall lot right off the highway.  Luckily, Erin asked a police officer if there was parking by the site so we took the back roads and parked literally 2 feet away from our start area with plenty of open spots in the RecPlex parking lots. That was all so confusing, but then again my brain wasn’t functioning on all cylinders since it was so early.  I just felt bad for the triathletes that must have been exhausted afterwards and had to walk a mile back to the outlet mall lot to get back to their car!  Crazy!

There was a lot of waiting at the beginning, which I was actually fine with. It was so neat to see all the gear and logistics that go into being a triathlete!  Plus, I was trying to figure out where I would meet Erin after she was done biking, where the 5k route was, etc.  So I was glad I had that time to settle my nerves and figure it all out!  (Sidenote/complaint: the two port-a-potties in side the bike area weren’t opened until the race started…whaaat?!) 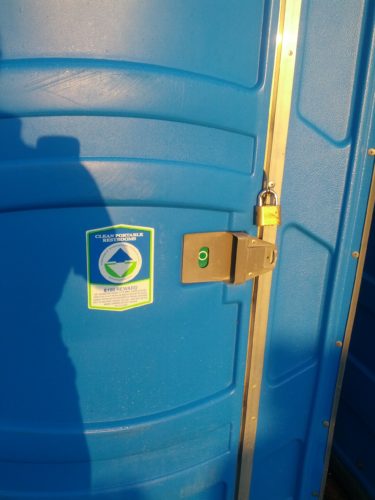 The swim portion started right on time and Erin and I were able to watch several waves before Kelsey started.  The relay teams were last (distinguished in yellow swim caps).  Once Kelsey started in her wave…Erin and I started speed walking over to the bike transition.  And VERY shortly after we got there, Kelsey was already done!  I saw her yellow cap passing up other swimmers that were even in earlier waves!  Kelsey made a quick transition to Erin and then she was off!  She had anticipate a pace of 17mph but ended up going around 20ish so she was done quickly too!  As soon as she got her bike back to the transition area, I ripped off her timing chip and attached it to my ankle and started to run it out.  I had such an adrenaline rush knowing that my teammates really pushed it so I wanted to keep the momentum going and contribute to a good overall time for Team Picolas Cage!

The run was around Lake Andrea for the first mile, then went out to a road and turned back for a little over a mile, then the last leg was finishing up the perimeter around the lake and ended behind the RecPlex.  I was so excited at the beginning that I ran a sub 8 minute mile and got scared because I wondered if I used all my energy too early!  But luckily, I kept pushing forward and weaved in & out of the other women and made my way to the final stretch with the cheering crowds on and I sprinted it out (whatever I had left).  I was looking around for my teammates and saw them and they sprinted in the last few steps with me (Kelsey doing it barefoot style!)  I checked my official time and discovered that I PR’ed too- which made it all the sweeter!

Afterwards, we got some breakfast (including fruit, pastries, hot breakfast burritos, juice, water and coffee) and ate at round tables with white tablecloths watching the other runners finish.  It was really nice to have such good food and a place to sit afterwards- very nice touch!  We then checked our official results and found out that Team Picolas Cage ended up placing 2nd of the relay teams!

Here’s how it broke down: 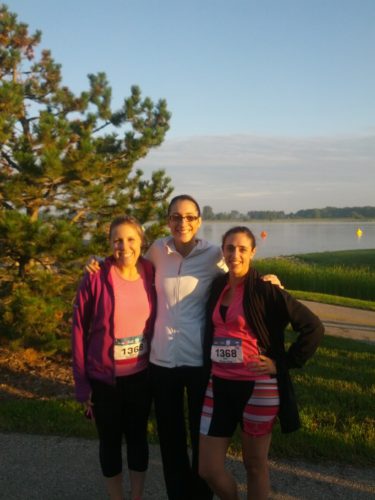 I had such a blast and would do it again now that I understand how everything works a bit more!  Coming from a team background from my soccer playing days, I missed having that group atmosphere since running is such an individual sport so this tri really added that team aspect that I missed!  Plus, it helped that I had the best teammates ever!

And as a sidenote: I wanted to mention that Kim’s relay team also did great!  It was so nice to see some familiar faces, as she was one of two teams with her local multisport club where she teaches strength class. We were in the same bike rack area so Kim and I were able to hang out as we were waiting for our bikers to finish.  Her husband was also there to take photos and he got some great ones, including these post-race celebratory shots: 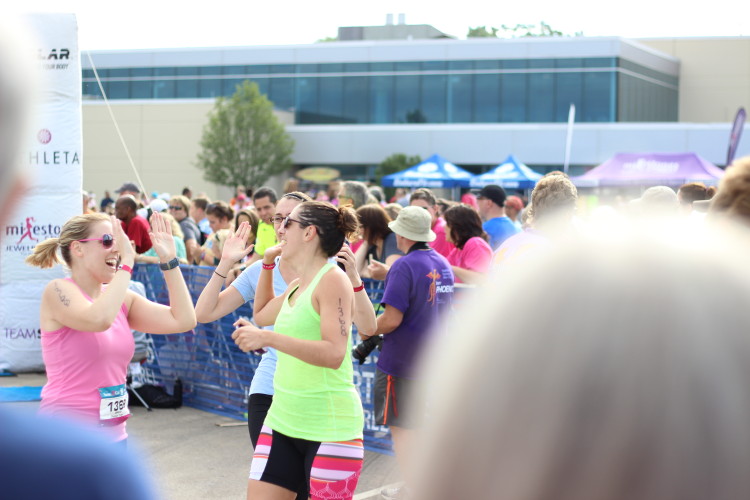 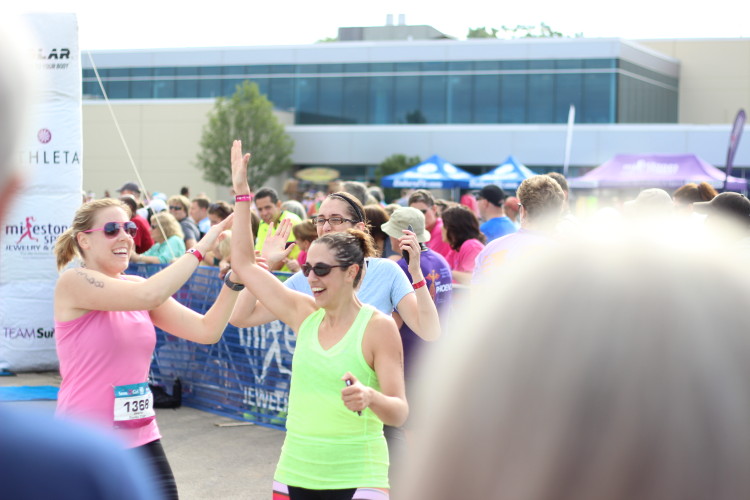 What a fun-filled weekend!  Can I do this all the time?! #runnershigh

Don’t forget!  You still have time to win a $25 gift card to virtually any retailer of your choice, courtesy of Chippmunk!  Enter here>>>