Towards the end of March, Lisa Lillien released her latest book, The Hungry Girl Diet.  It is a four week program that claims: “Big portions.  Big results.”  I own several Hungry Girl cookbooks and love Lisa’s TV show and really wanted to give this a try.  She claims that HG test dieters lost an average of 10 pounds in four weeks, with some losing more towards 20.  I’m standing up in two weddings in the next couple months, so I was STOKED to try it out. 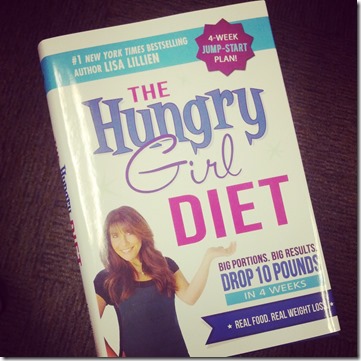 (And random sidenote: my friend Kelly met Lisa recently in Chicago!  So jealous!)

Anyways, I started by stocking up with all the food for week 1.  I’ve never consumed so many fruits and veggies before!  It took quite a bit of prepping on Sunday, but was well worth it.  If I didn’t prep, I wouldn’t have been successful throughout the work week.  And there are dishes.  Lots of dishes.  All those storage containers really add up! 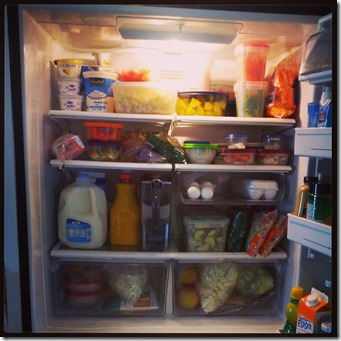 Each day contains three meals and three snacks, which you can eat however you want.  I usually had mine mid morning, one in the afternoon and then one as a “dessert” after dinner.  All of the recipes she has are for single servings, and the diet is set up to be roughly 1300 calories a day.  Of course, she notes that if you have 75+ pounds to lose or if you are a frequent exerciser, you should add in more snacks.  On some days when I was super hungry, I did add in some extra snacks (I blame it on the half marathon training.)  Also, LOTS of water.  One glass with every snack and every meal.  She encourages water in the morning instead of coffee to fill you up, but I’m not quite there yet—still need my cup in the AM!

As for the portions, they really are quite big!  Take breakfast for example.  The oatmeal portion was seriously HUGE (my bowl was about to overflow), but it was rather bland.  Next time, I’m adding WAY more cinnamon and trying sweetened soy or almond milk.  The eggs/english muffin was perfect for a quick breakfast during the work week.  Raspberries/blackberries are fiber powerhouses according to Lisa, so she sneaks those into the diet here and there too.

Lunches were pretty good too!  But again, lots of prep, so be prepared. (And in case you can’t tell, the salad on the left is accompanied by Greek yogurt, the veggies on the right are accompanied by dip.)

Dinners were good too!  HUGE portions.  On the left, the steamed broccoli slaw/cabbage (a tiny bit of olive oil and marinade on it for flavor) with salad, tilapia and shrimp was pretty good (I added the shrimp), and the veggie stir fry was my favorite dinner thus far.  SUPER flavorful and I didn’t even miss the rice that I usually would add to it.

I also made a HG version of fettuccini alfredo with broccoli slaw and Laughing Cow cheese wedges with chicken.  There’s a reason I didn’t post a photo of it.  It looked like….hmmm- well, not appetizing.  But the taste wasn’t terrible!

And since I’m a sweets girl, I’ve found a few tricks that help curb the sweet tooth: Sour Patch Kids gum (seriously, just like the candy) and Target’s version of the VitaTop, Yasso Bars and Veggie Muffins. YUMMM.

I also picked up some Quest bars, which are SO tasty and full of protein. Like 20+ grams.  Whoa.  (Check out Sierra’s review on them).

So at the end of week 1, I’ve lost four pounds!  I definitely feel a lot better after switching up my eating habits drastically (I am a chocolate bar a day kinda gal so this was HUGE!)  Still trying to find that happy balance in adding extra snacks due to half marathon training, so we will see.  The portions really are quite large and leave me feeling pretty full. Weeks 2-4 on the plan have a lot more variety in terms of options for meals.

Are you doing the Hungry Girl diet?  What do you think?