As part of my summer goals, I wanted to run a “longer” race.  For me that was Fort2Base.  A half marathon just seemed too daunting to me (although after this race, it doesn’t seem that bad now!), so this was the perfect distance. I followed the training plan for the most part and got in lots of long runs thanks to Kim and a few others along the way, which was SO helpful!

Prior to race day, Erin graciously picked up my race packet (Sidenote: Not sure how many race participants were from the suburbs, but if it was a sizable amount, I wish they offered another option for packet pick up.  Grumble grumble!)

Anyways, by Sunday morning, I woke up at 4am to get some breakfast, move my joints and stretch and hit the road by 5am.  Tyler was a good sport and drove me around that day, and I am so thankful he was able to support me!

By 5:30 or so, we made our way to the parking lot in North Chicago where Tyler and I parted ways.  Despite it still being dark out, I connected with Erin and we boarded the bus to the start line in Fort Sheridan.  By the time we were off the bus, I was starting to get really nervous, but luckily Erin and Kelly helped calm my nerves while we waited in line for the bathrooms before we started the race (which was RIGHT on time, I might add– love that!)

I told myself that I wasn’t going to aim for a certain pace, rather, I’d let my legs decide for themselves that day.  I ran/chatted with Kelly and Erin for a couple of miles and to make sure my pacing wasn’t too fast and ended up right in the 9:30 pace group of runners. I was feeling particularly good around mile 3 (the first few miles were on a narrow bikepath).  So when I saw a water station come up, I made my move around the pace group and just took off.   My pace got faster from there and I was feeling great.   I was a little surprised though, as some of the mile markers were a little off compared to my Garmin.  At one point, it was .25 miles off but after a few more miles it got right back on track—phew!  There were aid stations every two miles with Gatorade and water, which I utilized each time.  I also ate some energy chews along miles 6 and 10, which really helped keep me going. 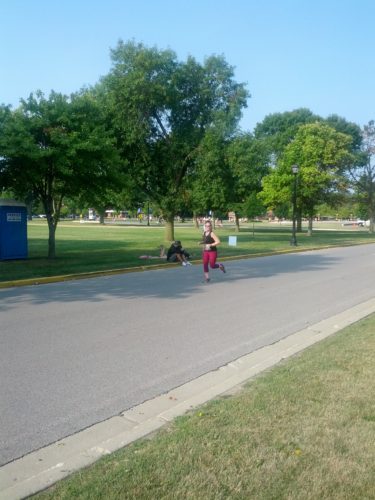 The last couple of miles were on the naval base, and I saw Tyler around mile 10.  I knew that the dreaded Hero Hill was coming up, but wasn’t sure exactly when so I tried to pace myself.  However, once I rounded a corner, I couldn’t miss it.   I literally let out an “oh crap” after seeing runners ahead of me walking up Hero Hill. It ascended straight up like a roller coaster at Six Flags. No joke.  So… I buckled down and just told myself to keep running.  The incline was so steep and my legs were burning.  I was breathing super heavy and my heart race was definitely up but I kept on running!  After what felt like FOREVER, I made it up that hill and then slowed down my pace to catch my breath before continuing on.  VICTORY!!!!  I had conquered Hero Hill with flying colors (in fact, it didn’t affect my pace all that much), but I still had about a mile or so to go. 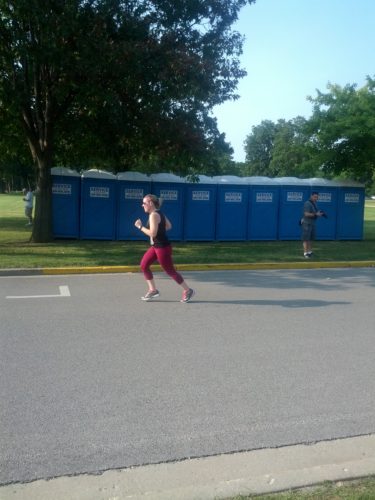 As I reached the finish line, I saw Tyler and got a last surge of energy to really kick it in at the end. My official time was 1:44:03. I felt great afterwards except for a sore neck…I really tensed up throughout the run for some reason.  I had such a feeling of accomplishment knowing that I set my mind to it, stuck to the training and finished faster than I had anticipated! 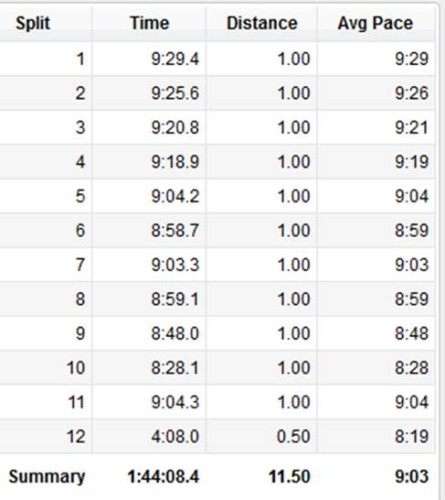 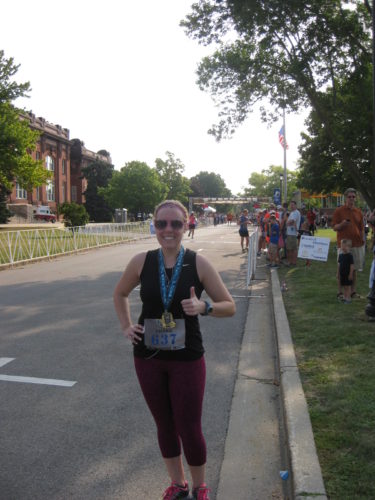 At the finish line, I got my sweet medal, and had my hands full with water, full size Gatorade, bananas, PowerBars, Sports Beans and pretzels.   Tyler and I took a couple photos then made our way back to the shuttle to be transported to our car at North Chicago.  We capped off our trip home with a trip to McDonald’s (hello iced coffee!) 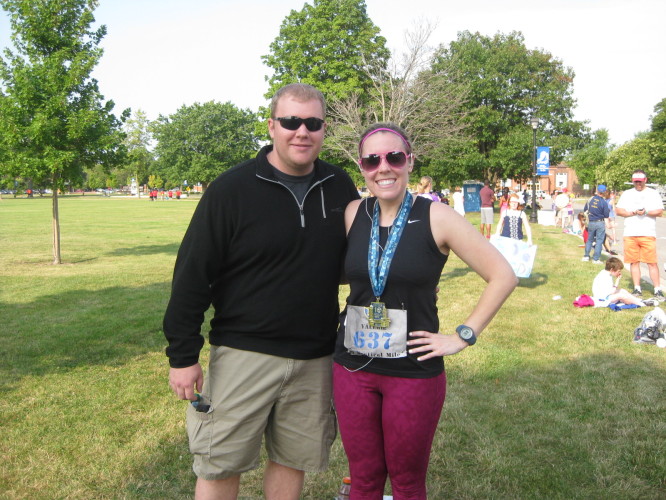 Overall, I had a really great time at this race.  As a “civilian,” it was neat to get on the base and see what it was like.  And the shirt and medal are really nice and certainly unique!  The shuttle buses weren’t my favorite part, but that’s to be expected with a point to point race and an added layer of security protocols when dealing with a military base.  Yeah, I get that. 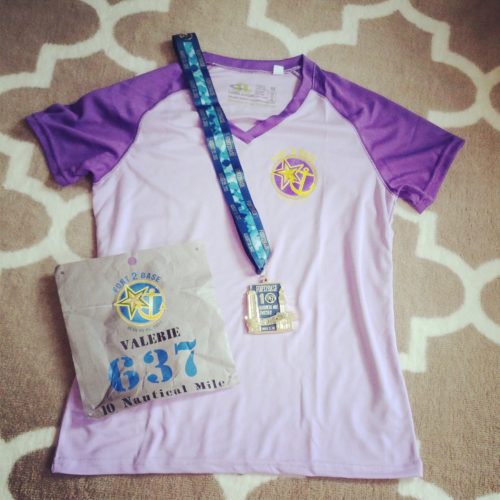 Now I feel like I have the running bug!  I don’t want to lose the momentum from my longer runs, so part of me wants to tackle a half marathon in the fall.  Hmmm.  Maybe?!  Any suggestions on good ones in the area? 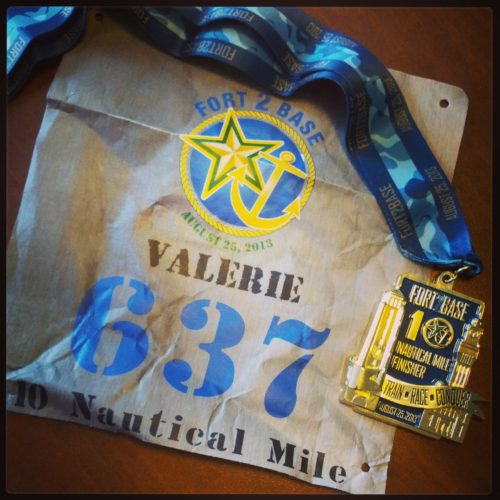 Disclosure: I received a complimentary race entry as part of Fort2Base’s blogger ambassadorship program but all opinions are my own!

PS- I’m in the running for the Chippmunk Expert Shopper Contest!  My submission is all about my gorgeous coral Hunter rain boots that I got for under $80!  Voting ends TOMORROW night so if you have a second, please vote here!  Thanks for your support! 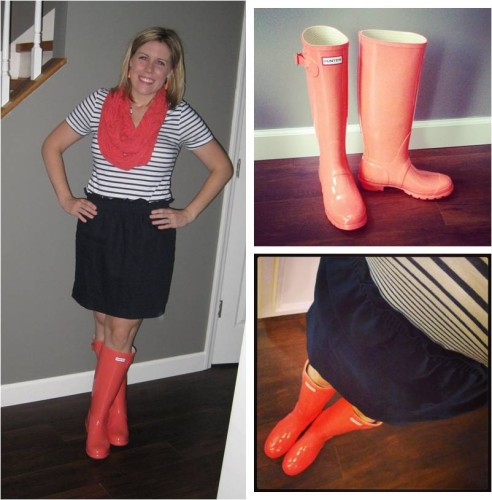