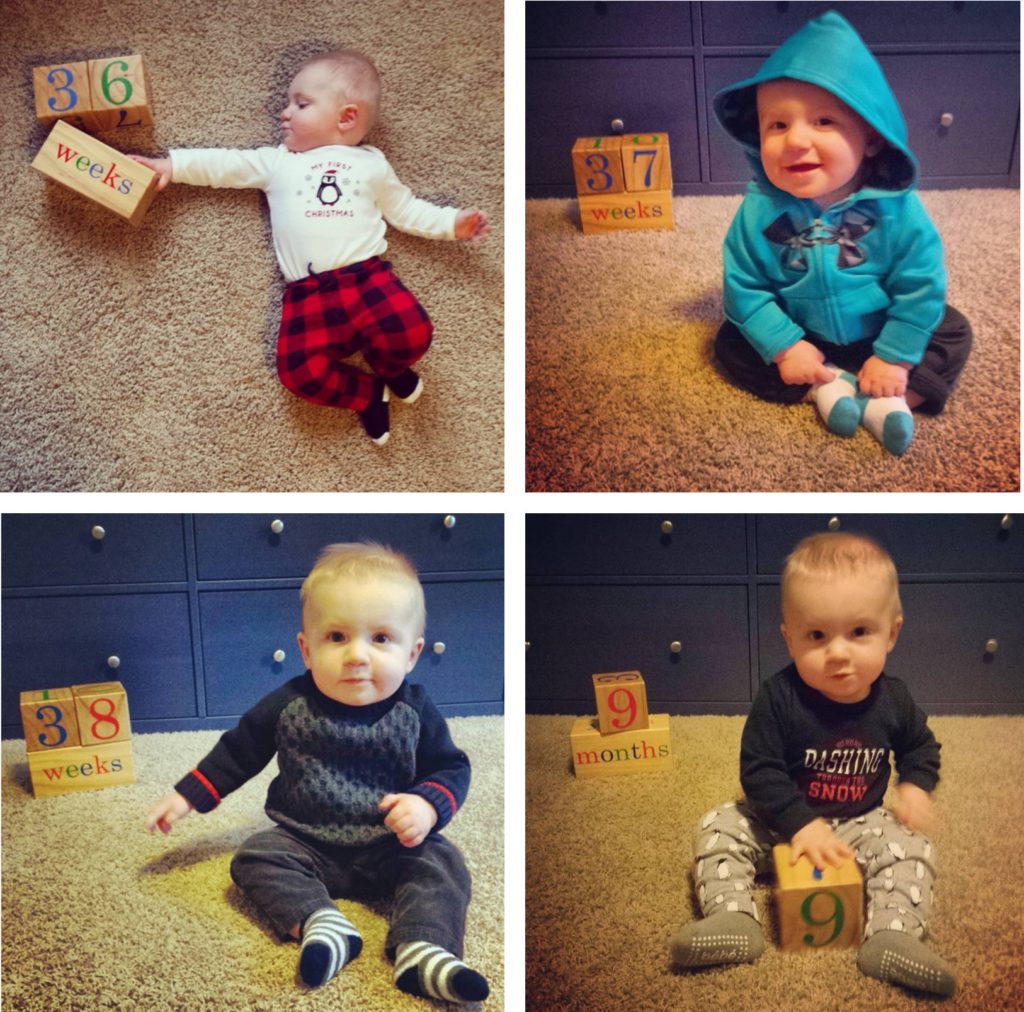 Diaper: finishing up using our size 3 diapers, then we are ready for size 4!

Clothes:
-9 months fit great for now, some 12 months too (tops mostly), 12 months pants are a little long
-also in 6-12 month in Old Navy sizing…loving their styles (plus since I shop there and have credit card through them, I can stack sales, SuperCash and credit card rewards- woo hoo!)

Eating:
Bottle- still 4x a day, 7-8 ounces a piece. But at his 9 month check up, the total ounces in his bottles will start to decrease over the next few months as we give him more food. By 1 year, he will start on whole milk- only a few short months away! Also went down to pumping from 3 times a day to 2 times a day right before Christmas since my supply has drastically decreased.  After  Christmas, went down to once a day and was only getting an ounce, maybe two, so kept up for about a week then I was done officially right before the new year…I am proud of myself for going 8ish months pumping and feel kind of liberated!  No extra pumping pieces to wash/sterilize, no lugging that pump around, yay!

Food-
-loves holding his spoon and putting it in his mouth
-can hold his bottle pretty well…sometimes I tip it up to help him ensure he isn’t sucking air, and loves holding his sippy cup to drink water…he guzzles it!  We started with one with handles and then tried one without and continue to practice!
-favoring store bought baby food over my cookin :-)  Or at least the sweet fruit over vegetables.  It’s like he sees the color and makes his judgment on eating or not…
-table food- tried bananas and avocados and sweet potatoes…didn’t care for them and just wanted to touch it, I ended up putting some of it in his mouth…after his checkup, we were cleared to try lots more things like Cheerios, Puffs, and other finger foods, along with toast, pasta, mild cheese and yogurt, ground up meats, you name it!  Aiming to give him three bigger meals like ours (covering the food groups) with some water and then bottles in between. SO fun to have him participate in our meals more and eat more things- it’s going to be fun :-)

Sleeping:
-Naps- short ones in AM, longer (up to 2 hrs) in the afternoons right after a bottle
-LOVES being on his belly…hands tucked under him and butt in the air.  The cutest.
-lots of teething going on (two bottom teeth have been out for a while now, and first one on the top just broke through), so he will wake up in the middle of the night.  I rock him to sleep and console him, and when he goes back in the crib he wakes back up.  It’s been some rough nights, but the doctor said that unless he is sick, etc. just to try to avoid giving him Tylenol all the time and get him to self-soothe.  Tough, but last night he slept through the night again. Let’s hope we get a streak going here!

The Highlights:
-1st Christmas–> tried some table food, played in the snow, set up his swing from a log rafter so he could bounce away, and enjoyed the paper portion of opening presents, also fell in love with his newest toy: a silicone spatula.  He won’t put that thing down! Also visited Santa a couple weeks prior.  By the time we got to see Santa, he fell asleep.  The photos were great though- Santa pretended to sleep too, and T and I even got in on the napping in a photo.  So precious!
-Also loves playing with our coasters.  It’s the simple things evidently!
-12/29- standing in crib when I went to get him in the morning…and hasn’t stopped!
-Earlier in the month: on hands and knees in crawling position- very deliberate and scooches everywhere, mostly backwards, no forward action yet! LOVES standing and pulling himself to stand- uses toys, people, furniture to help himself up.
-12/30-  he legitimately crawled from point A to point B.  Whoa!  And he’s been going nonstop ever since!
-1/14- started cruising (walking while holding onto furniture/his toy).  Note: time for the baby gates/child proofing to officially begin!
-Went to his first VU basketball game with friends/classmates of ours and their little boy.  Also made three new friends- neighbors that are 1-2 years old, but love seeing him start to socialize more and more.  A new Little Learners session started up at the library too, so glad we can get him some interaction- which is hard with the winter and him being cared for at home.
-Figured out the light switch at my parents’ house and likes switching it on and off (when he is held so he can reach it of course!)
-We may have a little separation anxiety starting…he definitely likes being held by me (makes me feel so loved, but want to be sure he doesn’t get used to it all the time!)
-Loves rolling over from his back to crawl, especially when changing his diaper.  Makes things quite difficult as you can imagine!  Also, standing in the tub.  Go figure!  It makes bathtime a 2 person job for sure.
-I had my first night away from Bryce since he was born (Dad and I went to Lake Geneva for a race/getaway with friends- so fun and he did great with his grandparents!)