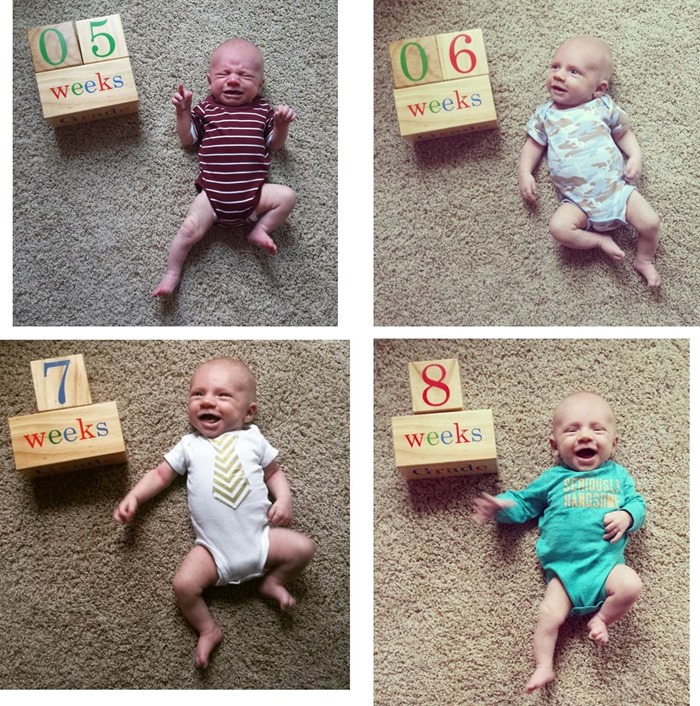 The Highlights:
-Found your lungs and are a bit more fussy- especially in afternoons and evenings (just in time for when Daddy gets home)
-Loving your Kick & Play Piano Gym and looking at yourself in the mirror
-Want to be held all the time- a little snuggler!
-Staying awake longer during the day, taking things in
-Right around the 8 week mark, moved out of newborn clothes–thank goodness-,he has a large head (90th percentile) so it’s been tricky to dress him!  He gets it from both Daddy and I.  Whoops!
-Finished up the newborn diapers at about 9.5 weeks and graduated to size 1!
-Sleeping longer stretches at night (occasionally there is a 3am feeding in there), but usually you are asleep after your last bottle around 9:30pm and up at 5am.
-Loves being swaddled (it quiets you down!), especially when it’s time for bed
-Enjoys car rides and long walks- both put you to sleep!
-Recognizing faces, tracking people as they walk by, and smiling a TON—at everyone from Mommy & Daddy to ladies at the doctor’s office to random strangers out shopping—what a charmer!

Wow…I literally can’t believe another month has come and gone and that Bryce is 2 months old (actually 9.5 weeks as I right this). He is literally growing before my eyes and looks like a little man!  It’s so incredible to watch him grow and learn each day.  I so enjoy watching his eyes start to explore and learn the world.

Overall, everything is going well.  Bryce is starting to sleep though the night which we are SO thankful for!  Occasionally, he will wake up in the middle of the night, but for the most part, we are sticking to a routine and he sleeps well once he’s had his last (large) feeding and gets swaddled to go in his bassinet (although he is a noisy sleeper!)

In terms of eating, he usually eats six times per 24 hour period if he sleeps through the night- taking 24-26 ounces.  Doctor said we can try upping the ounces, especially at night before bed and see how it goes.  Pumping exclusively has been so great for both Bryce and I.  We wash/sanitize bottles daily, but it’s worth it all around.  At his checkup appointment, Bryce was referred to physical therapy for possible treatment of torticollis, an assymetrical head/neck position, which I’ve heard is pretty common in newborns.  Interested to hear what the PT says later this week.  Hopefully we will get some exercises to do and hopefully it will correct itself!

Bryce was also baptized at 7 weeks.  It was such a wonderful day and we were blessed to have Bryce’s godparents and grandparents there to celebrate.  Our extended family came over afterwards to party too!

Bryce also had a couple “play dates” AKA sleeping by his similar-aged friend Gracin while his mommy and I walked on the trails.  We also went out to dinner to celebrate my cousin’s graduation and all went well!  He sleeps right through trips to the grocery store (and was in awe of the floor to ceiling STUFF at Costco.)  Many neighbors and friends have met (and held) him too.  We even took a day trip to Indiana while T was at a conference and he traveled so well!  Izzy has also been warming up to him day by day (and shared the backseat well on our day trip!)

Month three will bring some fun adventures, I’m sure.  We are looking forward to taking a trip up north to the cabin to meet Great Grandma!  Can’t wait to see what it holds!

Bryce Loves:
–being held & snuggled
-smiling and laughing
-bath time
-eating!  (what a guzzler…I have to slow him down!)
-stroller and car rides
-playing under the Kick & Play Piano Gym
-being swaddled (this one and this one are favorites)
-mesmerized by the TV
-when Mommy dances or walks around with him and sings

Bryce Dislikes:
-not being held
-diaper changes
-shots (Mommy hated seeing him get them, too!  I could have died!)
-tummy time (although it’s growing on him)

Check out the other updates: One Month